​          Recently, I met my father's parents for the first time that I remember. They were so unfamiliar to me that I could barely remember their names, let alone recall what they looked like. I only knew them by the way they signed a Hallmark birthday card with two dollars inside. But one day after school my mom handed me an envelope. It was from them, the first one I had seen in years. And much to my surprise the return address was an apartment complex in Durango about three minutes away from where I live now. Figures. At first I was anxious about what was inside. And as soon as I read the first sentence, rage and confusion washed over my thoughts. They wanted to meet me, make up for lost time they said. They had never wanted to see me before, why would they want to now? My mom had tried so many times when I was younger to get in touch with them, so they would know that some sort of relationship was wanted. They never called back, so I was torn. I appreciated that they wanted something to do with me now, but resented that it took them eleven years to do so. But I saw the value in being open minded towards these people I didn't know, because my mom always taught me that you should never judge somebody until you know their story.

I’m not sure if I forgive them completely, but for one hour, I did. And it was something my grandmother said, she looked at me with the same blue eyes as my father, and simply said “I never thought that you would want to see us-”, she choked up, almost like she swallowed her words. For one moment I felt for her I don’t know why. I wanted to forgive them, and I wanted to forgive myself. I wanted to let go of my disappointment and release myself from negative thoughts I’ve had for years. And for two or three seconds, I could feel myself starting to cry. Not because of pain or grief but because I knew that it wasn't my fault.

And this I believe … with forgiveness comes liberation.

The main focus of this project was to produce our own puppet show, depicting one of William Shakespeare's famous plays : Midsummer Nights Dream.

My initial thoughts when I was told that the class would be studying Shakespeare were negative, but as we got further into the project I found that it wasn't as boring as I had first thought it was going to be. It helped that we were able to learn Shakespeare in a way that was engaging, and straight forward. We learned how to unfold and understand Shakespeare's language in an entertaining way, which was a different experience for me. I think that the best moment of the whole production was when the night of the first show came and we had to make everything work without proper rehearsal, and it honestly worked out better than most people though (kind of). But through all of the stress my overall experience studying Shakespeare was a total success compared to the last time, and I thoroughly enjoyed it.

There were a lot of problems during the beginning stages of the production. Loss of momentum due to snow days, and the stress of having to formulate an entire play hadn’t set in yet. One thing that slowed the production down a lot was being introduced to a new method of making the sets and puppets that not everybody learned, so it was hard to pick up momentum when we didn't know how to make the things we needed to. But there was no option of not putting on the play, so we just had to push through all the of the complications. So at the last minute we had to go back to the method we were using before and cut all the puppets we needed to by hand. And in the end the visual effect was virtually the same.

During this project I grew as a learner and as a group collaborator. In previous years I had studied the works of Shakespeare by reading it out of a book and then taking a test on it, this new, innovative and alluring way of learning Shakespeare helped me comprehend it, so I can push my learning even further because I have a solid understanding that I can build on. It helped me expand my parameters as a learner and progress as a student. I also got more proficient working as a collaborator. In a class project there’s a lot going on and a lot of people are doing all different things. We had to figure out most of the problems by ourselves and then work together to solve them, and then move on. As a group we also had to make sure that everybody did their job, which was hard at times. But in the end it turned out to be a very amusing production, even if it didn't run as smoothly as everyone had hoped.

One important lesson that I learned for future projects / exhibitions is that rehearsals are a very crucial part in putting on a play. If you're unprepared, it definitely shows. Rehearsals can be helpful for almost every exhibition, like reading your paper over so you know what important parts you should say, or practicing your poem, anything really. It will keep you from feeling unprepared and more comfortable presenting. During our show, I think that they audience could easily tell that we hadn’t rehearsed enough of the play for it to run smoothly. It was catastrophic to the point that you just had to laugh about it. This example is just one of many that could have easily been avoided with a few extra days of rehearsal.

​          Now that I have finished studying Shakespeare, I have more of a positive mindset towards it. I think that the way he writes is very confusing, but portrays an ageless message that applies to all generations. That’s why his works are so timeless, that’s why people continue to study them 400 years after they were written, it’s because they all still have importance. And I think that’s why I was engaged in the unit, it’s because they will never lose their eternal significance. 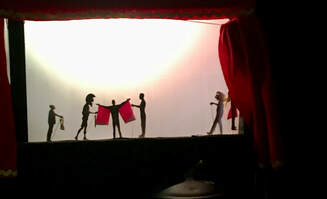